Preventing THE transmission oF DISEASE at toronto western hospital 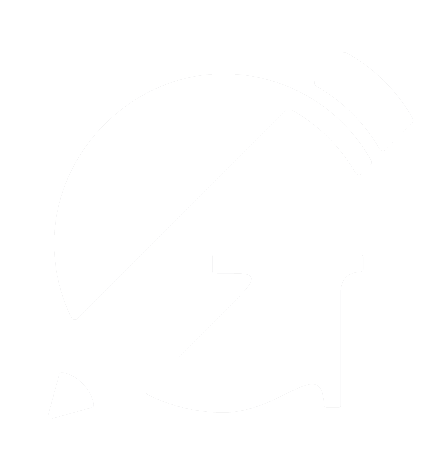 During my internship at Healthcare Human Factors, I worked on a project to improve personal protective equipment signage at Toronto Western Hospital. After more than 7 design iterations, ethnographic research, and usability testing with nearly 30 users including healthcare workers, patient visitors, social workers, medical students and more, the signage is now being used at the hospital.

Preparing for a pandemic

Prior to reading this case study, have a look at the poster that I designed to support the Toronto Western Hospital in spreading awareness about correct PPE practises in the face of COVID-19. This and all other signage presented in this case study is being currently being used at the hospital. 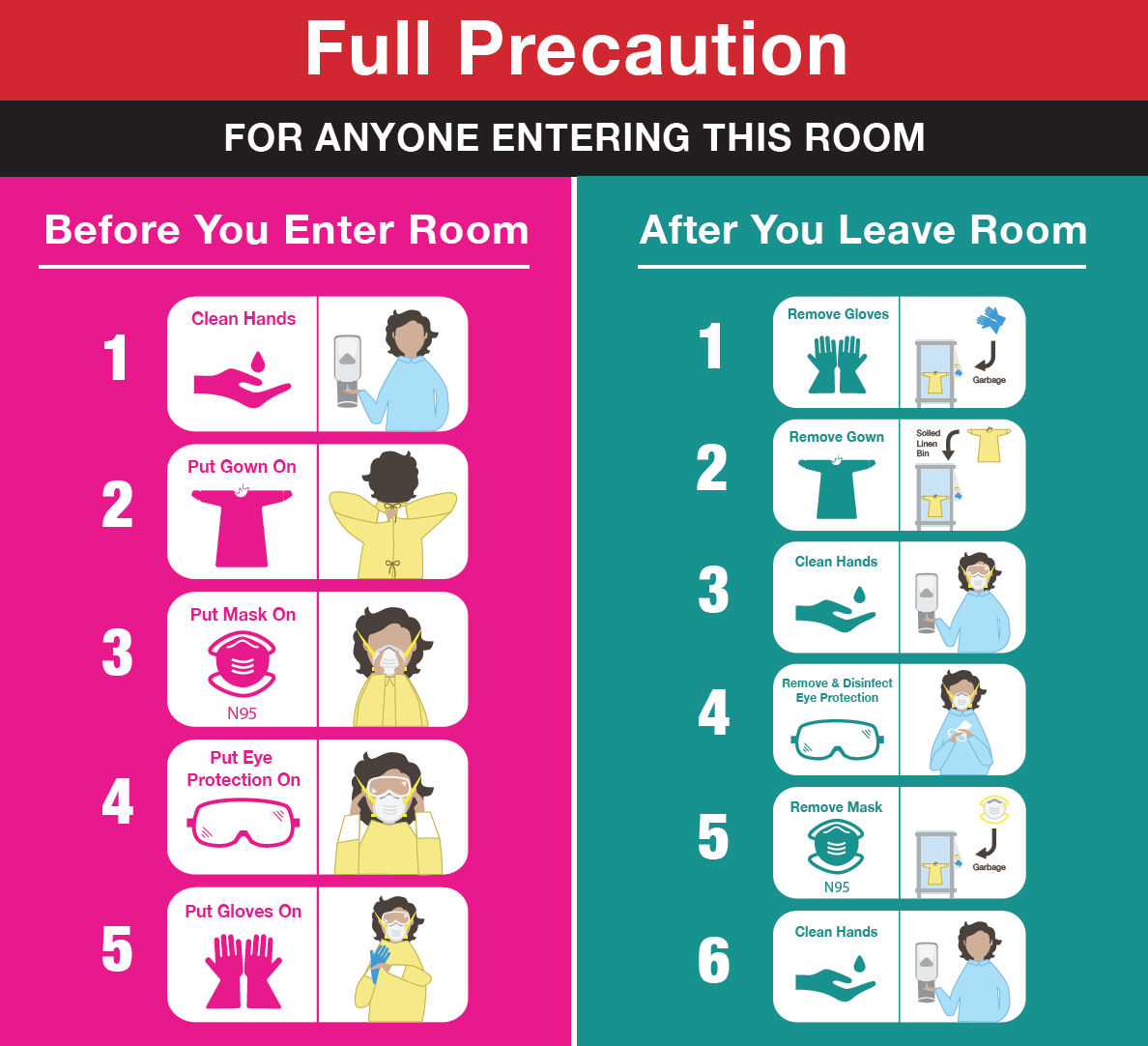 Healthcare workers (HCWs) caring for infectious patients are required to wear personal protective equipment (PPE), but often make errors when donning or doffing these garments, resulting in the spread of harmful bacteria. In a study involving 125 HCWs caring for infectious patients at Rush University Medical Centre in Chicago, it was found that 39% of the workers made multiple mistakes in donning and doffing the PPE and as such were more likely to have picked up multidrug-resistant organisms after patient encounters. For example, four of the HCWs acquired a hand contamination, and all four had made errors while removing their gloves and gowns. In fact, the likelihood of hand contamination was found to be 10x higher when the gloves were removed before the gown.

A similar issue has been plaguing the Toronto Western Hospital (TWH), with members of the Infection Prevention and Control (IPAC) team witnessing both staff and visitors failing to don and doff PPE correctly. As such, IPAC came forward with the following project:

“We’re struggling with staff/visitor compliance with donning and doffing personal protective equipment (PPE) appropriately.  Our current signage indicates what PPE to use for what type of additional precaution the patient may be on, however, it does not indicate the safest order to don/doff the equipment. It can be confusing for those who are unfamiliar with PPE use. Further to this, the isolation carts which hold all of the PPE are messy and contain a variety of PPE (yet not always the PPE actually required) which adds to the confusion.

‍We’d like signage for the everyday type of additional precautions: Contact, Droplet and Airborne, that clearly indicates what PPE you need to wear and in what order you need to put it on and then take it off.  It also needs to be displayed in a way that is easy to understand for those who do not speak English given the diverse population we see across our sites.  Further to this, we’d like to somehow coordinate signage with our isolation carts/PPE to make donning and doffing super easy. Considering that the highest amount of PPE is used during flu season, I’d ideally like this to be trialed on a unit and rolled out by flu season 2019/20 (November)."

Two graduate students enrolled in the program, Carman Mak and Yordanos Woldemariam, conceptualized the project, working on it throughout the summer of 2019. In this case study, I will start off by showing the current PPE signage being used at TWH, and the signage that Carman and Yordanos designed to try and combat the issues that were described in the scope. Once Carman and Yordanos left, I picked up the project along with a Design Researcher (Athina Elena Santaguida), and we conducted several rounds of usability testing and design iterations before finalizing the posters for trial. Over the course of this case study, I’ll show all of the major iterations of the signage to demonstrate how it evolved overtime to best serve user needs.
‍
NOTE: Any relevant terminology or acronyms will always be italicized and you can refer to the word bank at the end of the case study to learn what they mean. 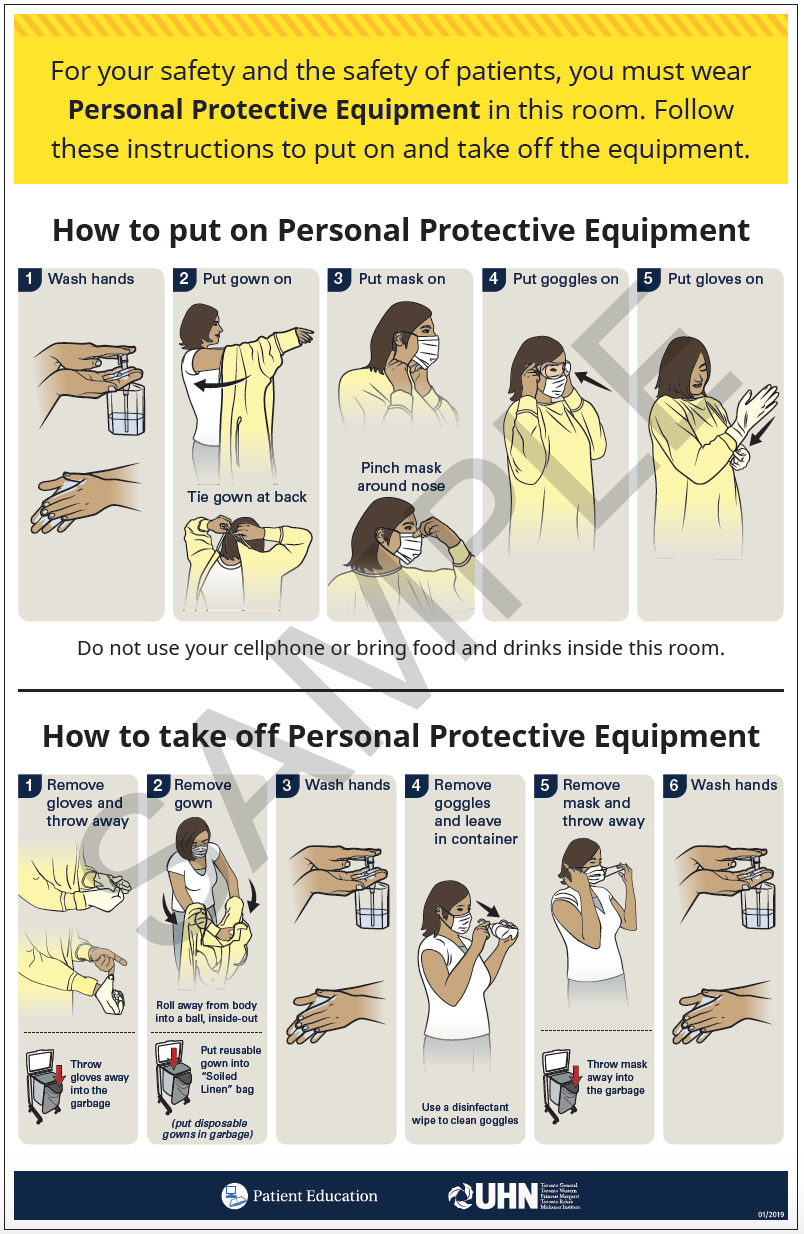 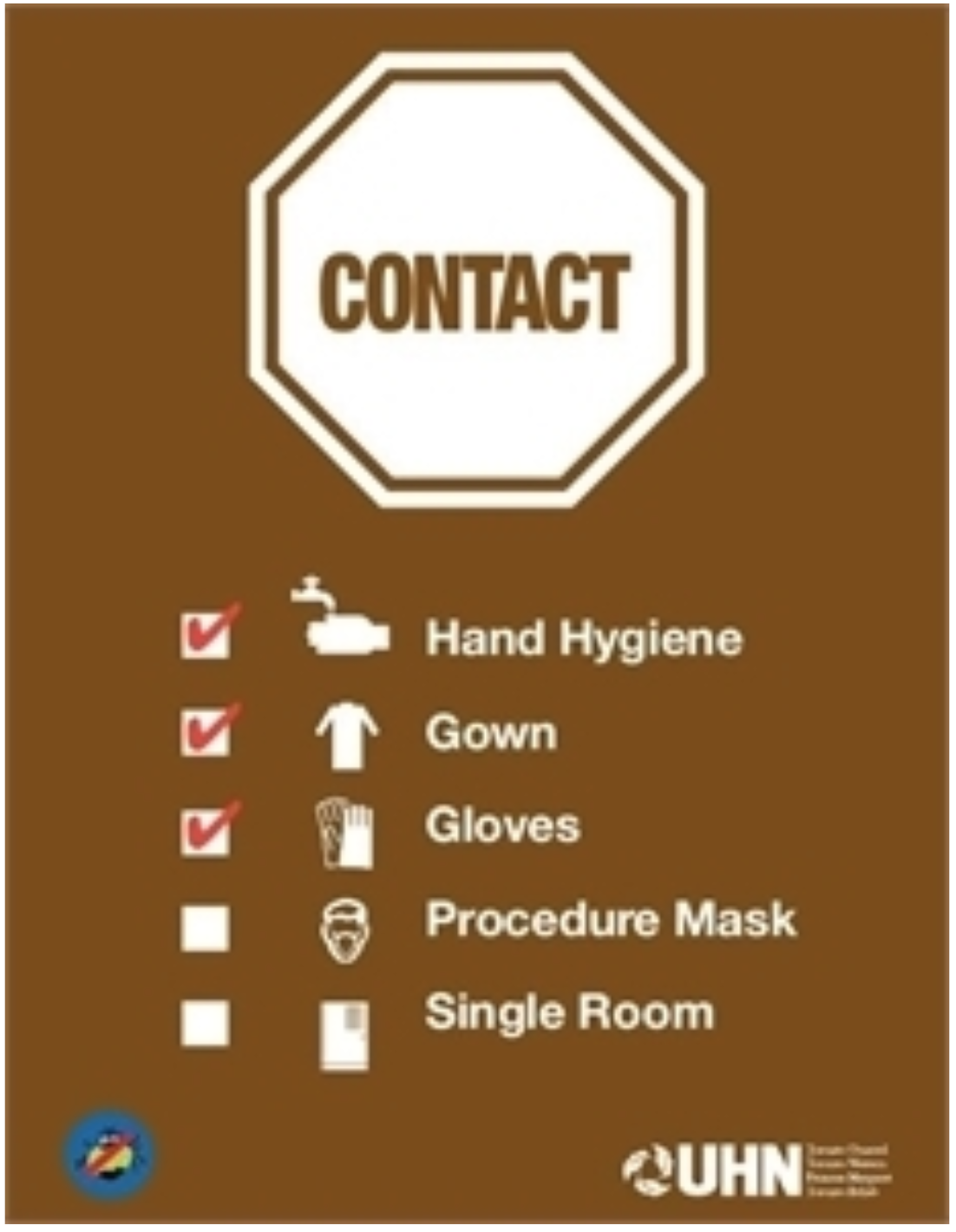 The following images depict how the signage might be hung outside of the patient room. Additionally, the cart seen in the top three pictures is referred to as an isolation cart, and contains the PPE. Although the isolation cart is typically bright yellow, it sometimes appears differently as seen in the image in the top centre in which there is a black cart instead. 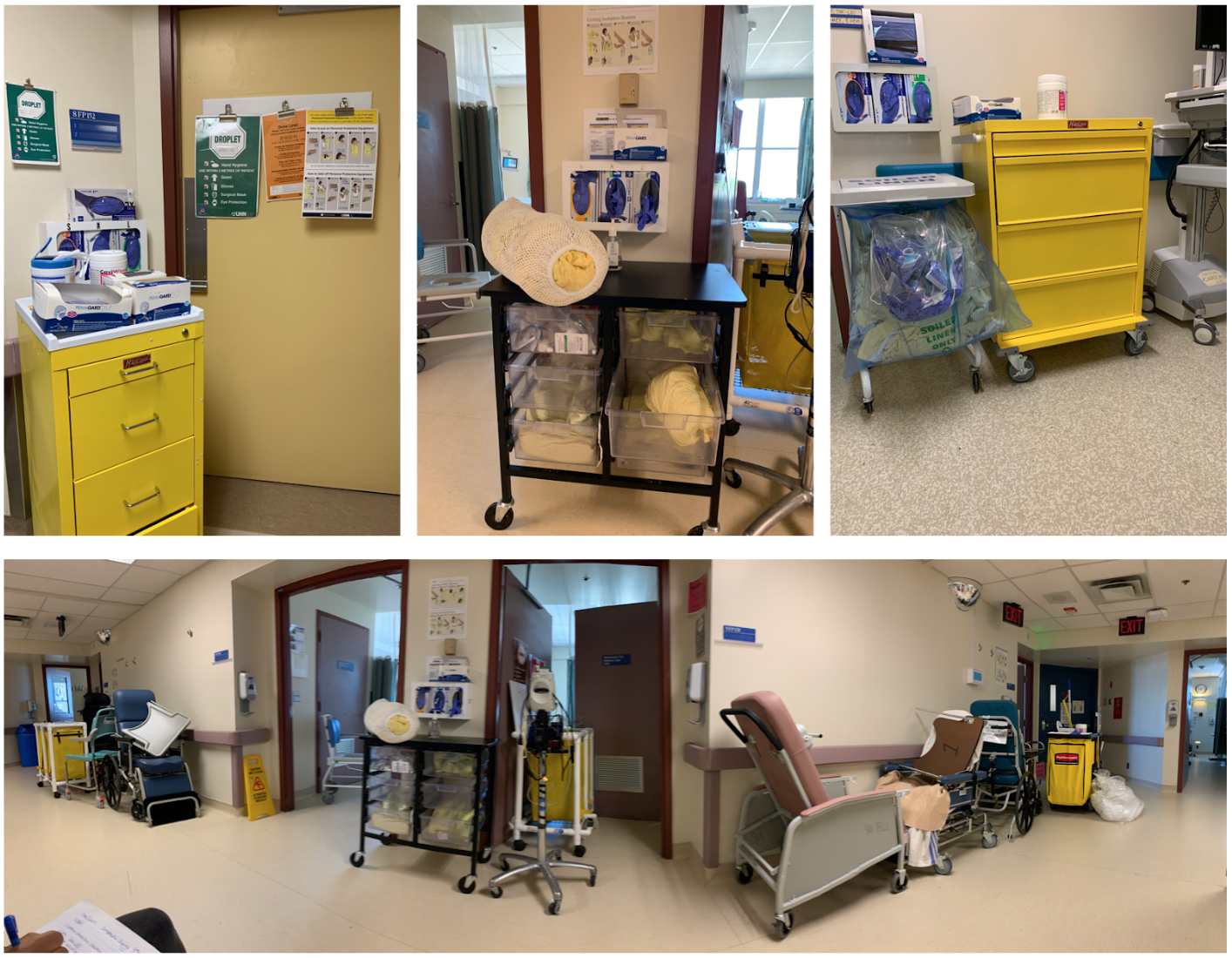 Each iteration of the signage will be explained in depth with the design changes that were made and the results that were obtained through usability testing, but to get a high-level overview of how the system evolved, click on the thumbnail to see all the iterations of the primary PPE instructional poster. See if you can spot some of the major changes that were made along the way, and try to guess why we might have made them before reading on! 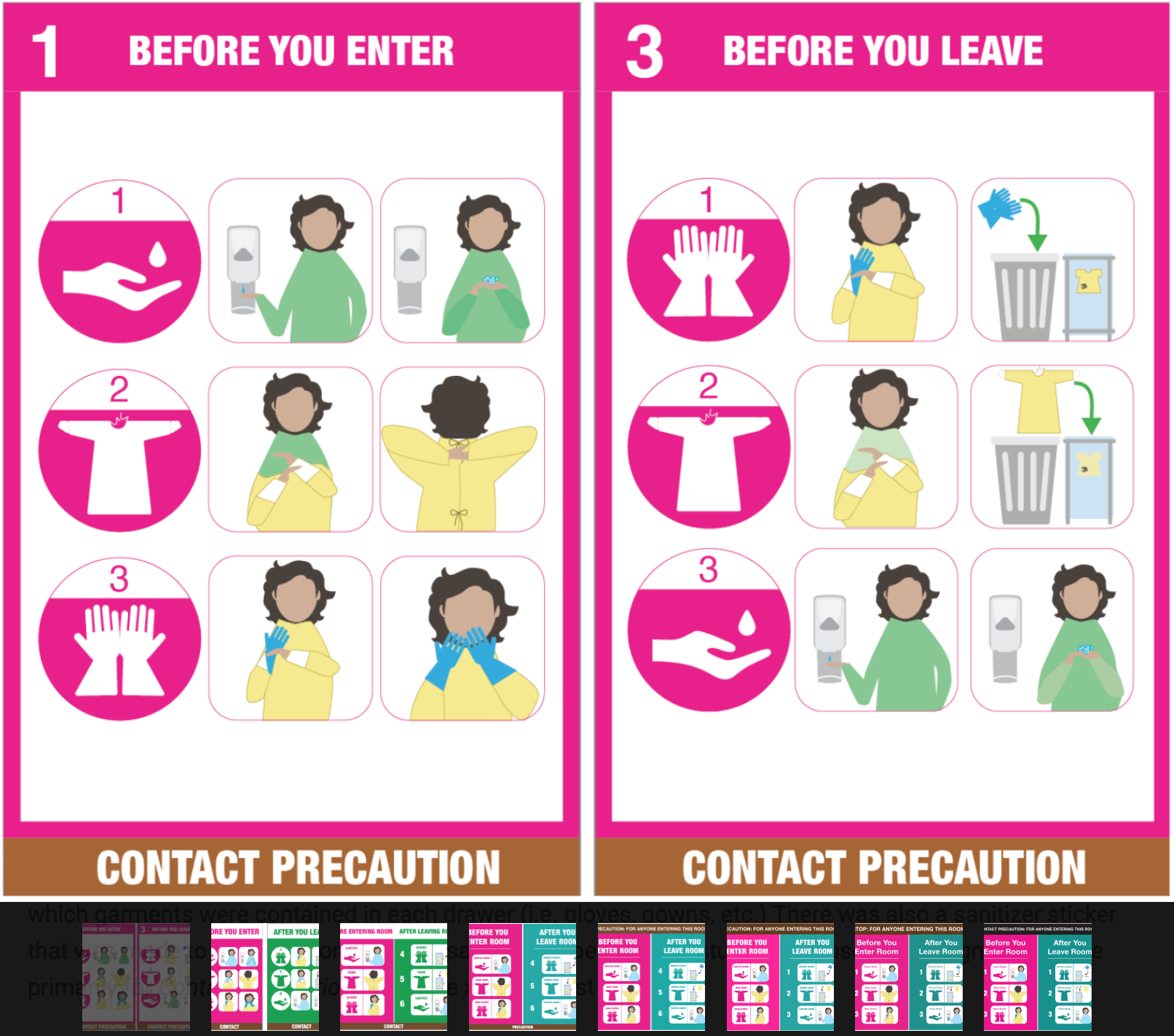 These are some of the assets that Carman and Yordanos, the graduate students who intiated the project, provided us with before leaving. At the time, they’d designed two separate posters, one to indicate what PPE to don before entering the room and in what order, and one to indicate how the PPE should be doffed after leaving the room. They also redesigned the stop sign that is placed on the door of the patient unit, and designed some additional signage to be placed around the doorway to serve as extra reminders. Finally, for the isolation cart, the students created stickers that could be placed on the drawers of the cart to indicate which garments were contained in each drawer (i.e. gloves, gowns, etc.) There was also a sanitizer sticker that was made to be placed on the hand sanitizer dispenser. The students focused on designing signage primarily for Contact Precautions as these are the most common. Athina and I performed the first round of testing with these assets. 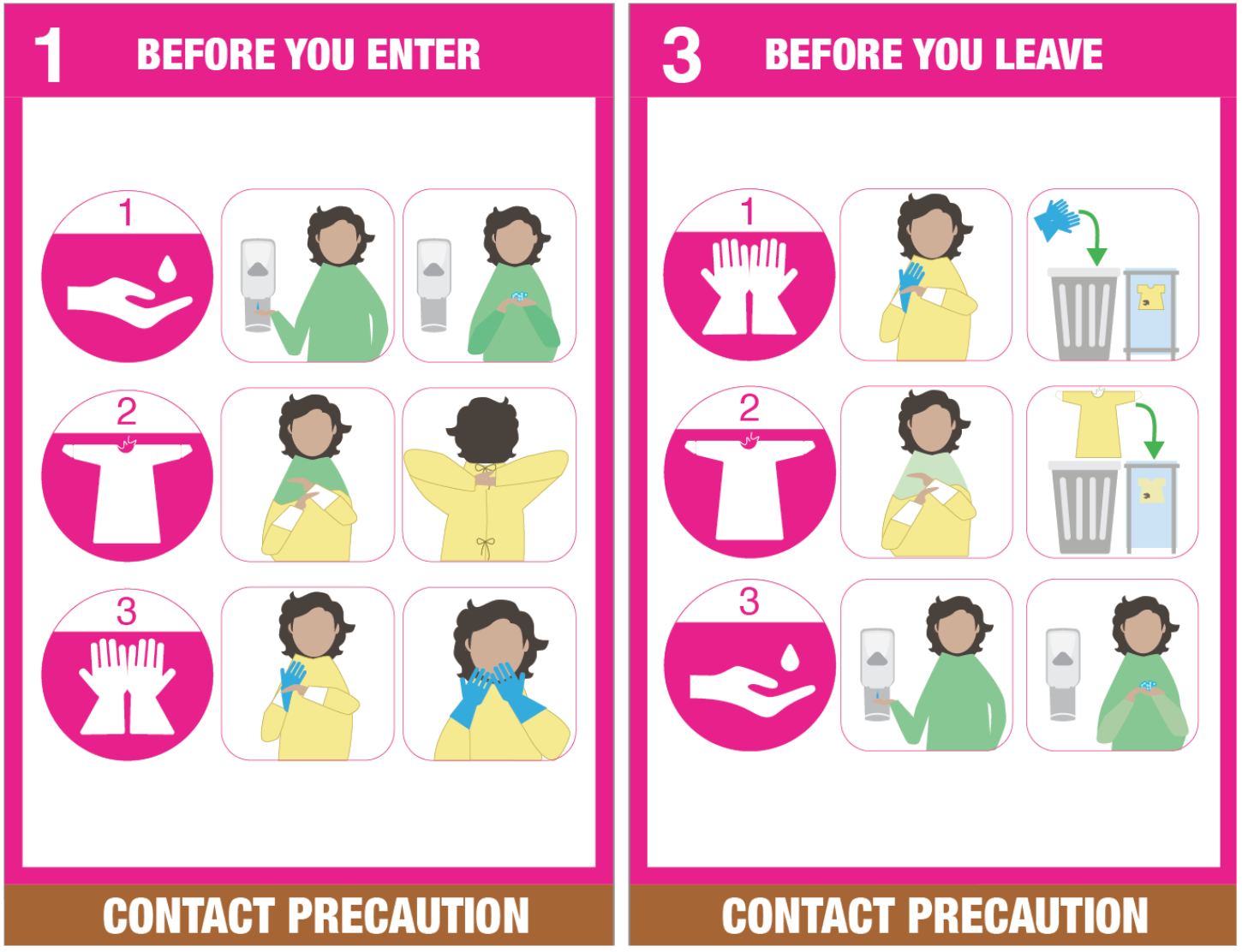 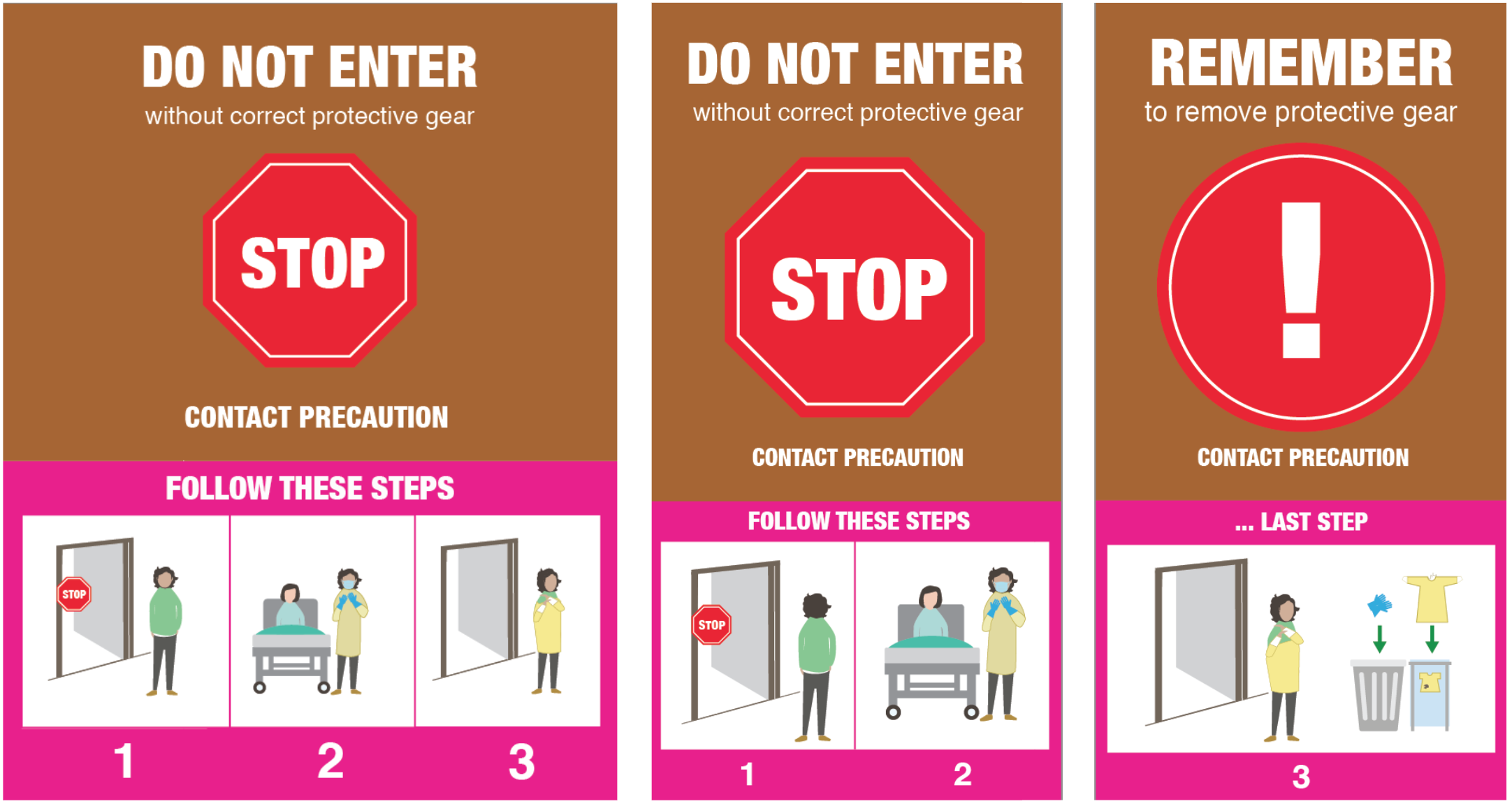 The isolation cart stickers remained the same in this iteration. 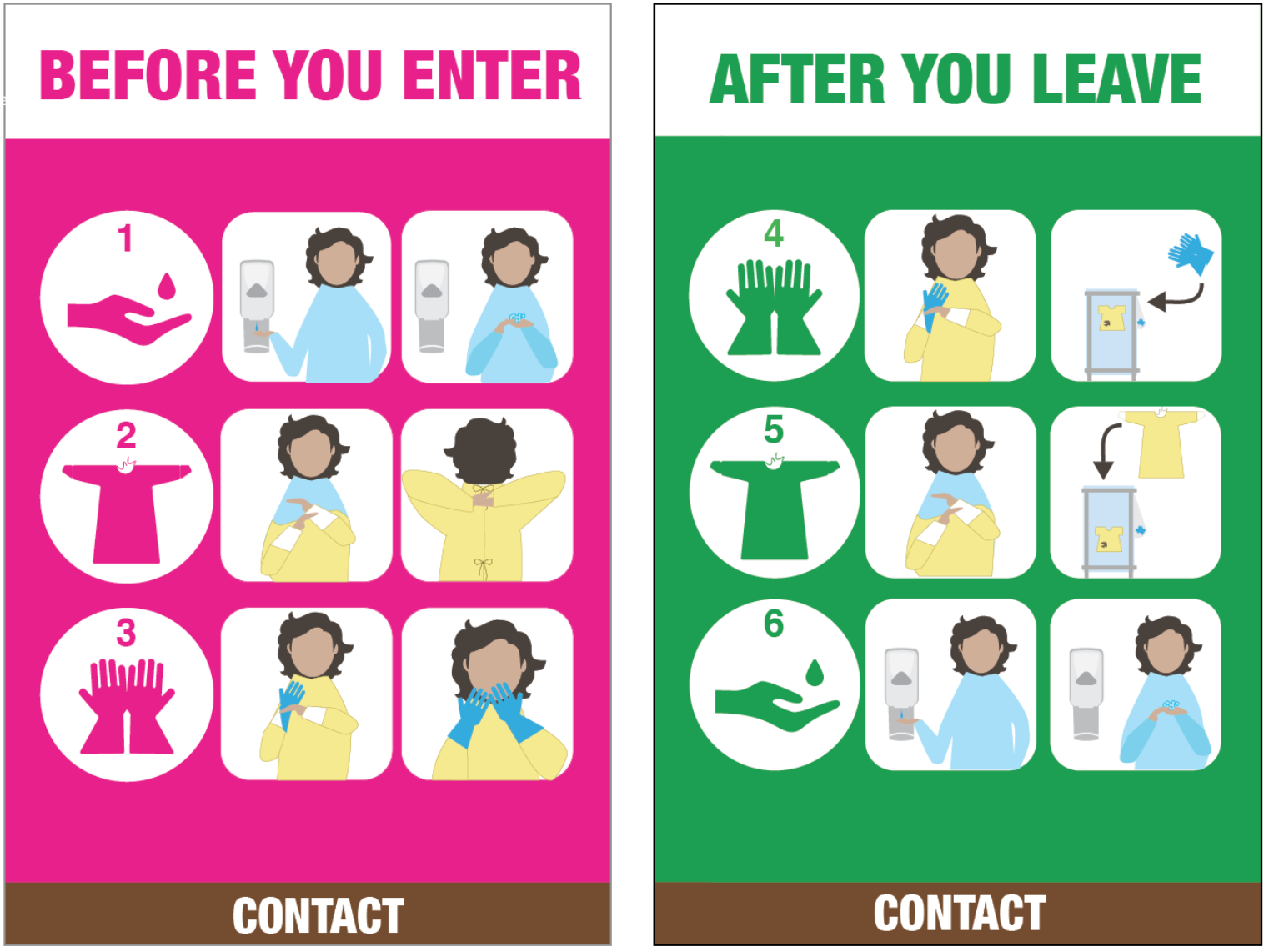 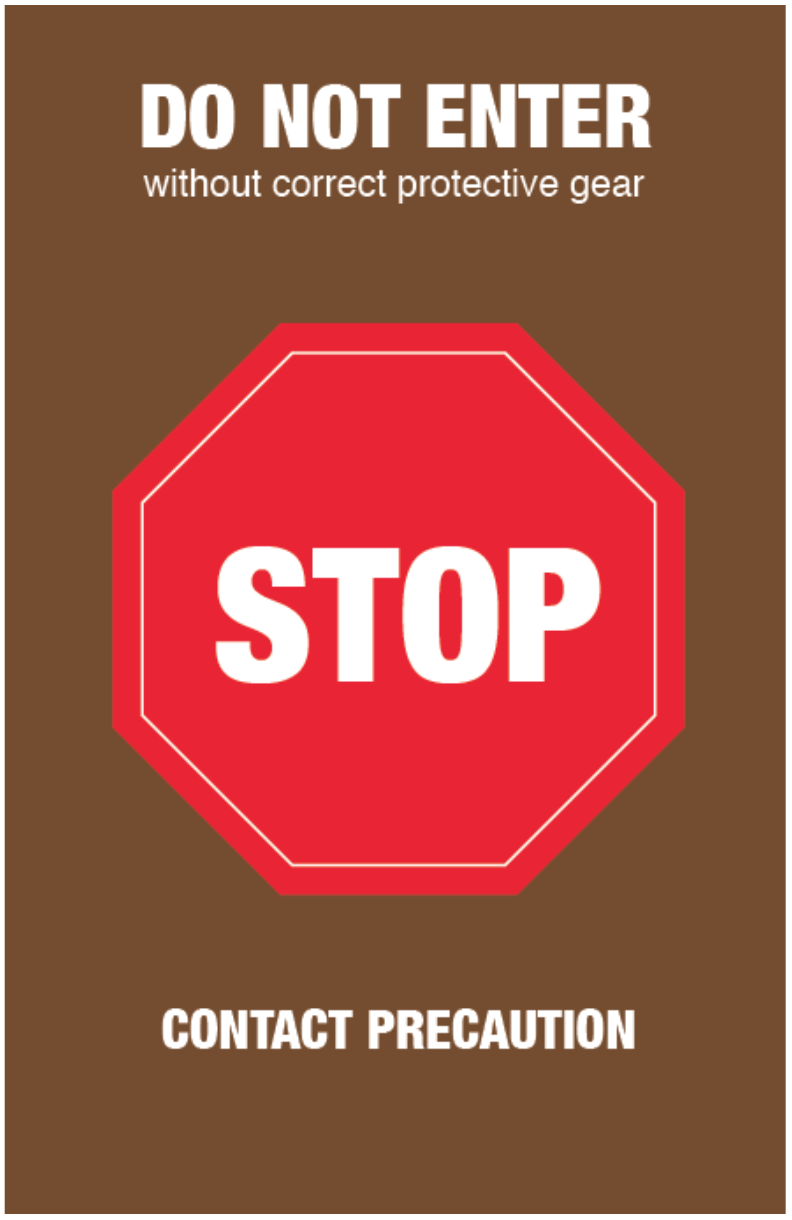 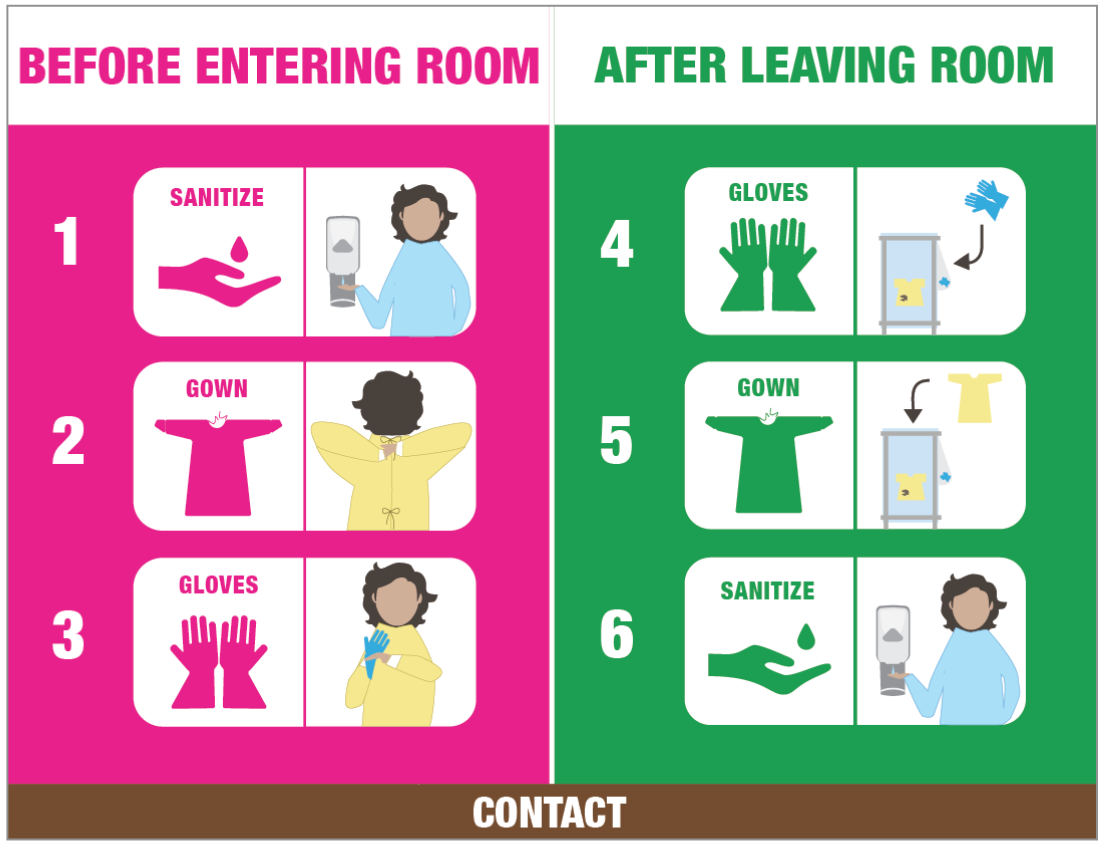 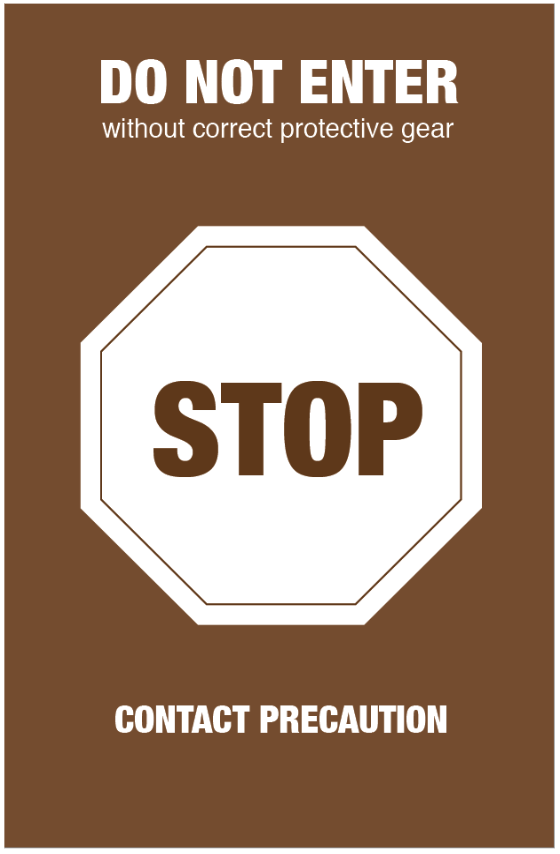 This time around, Athina and I presented the updated posters to our coworkers during one of our team Design Crits to get their feedback on both the UX and the design of the system.
‍
WHAT WORKED
‍

The isolation cart stickers and stop sign remained the same in this iteration. 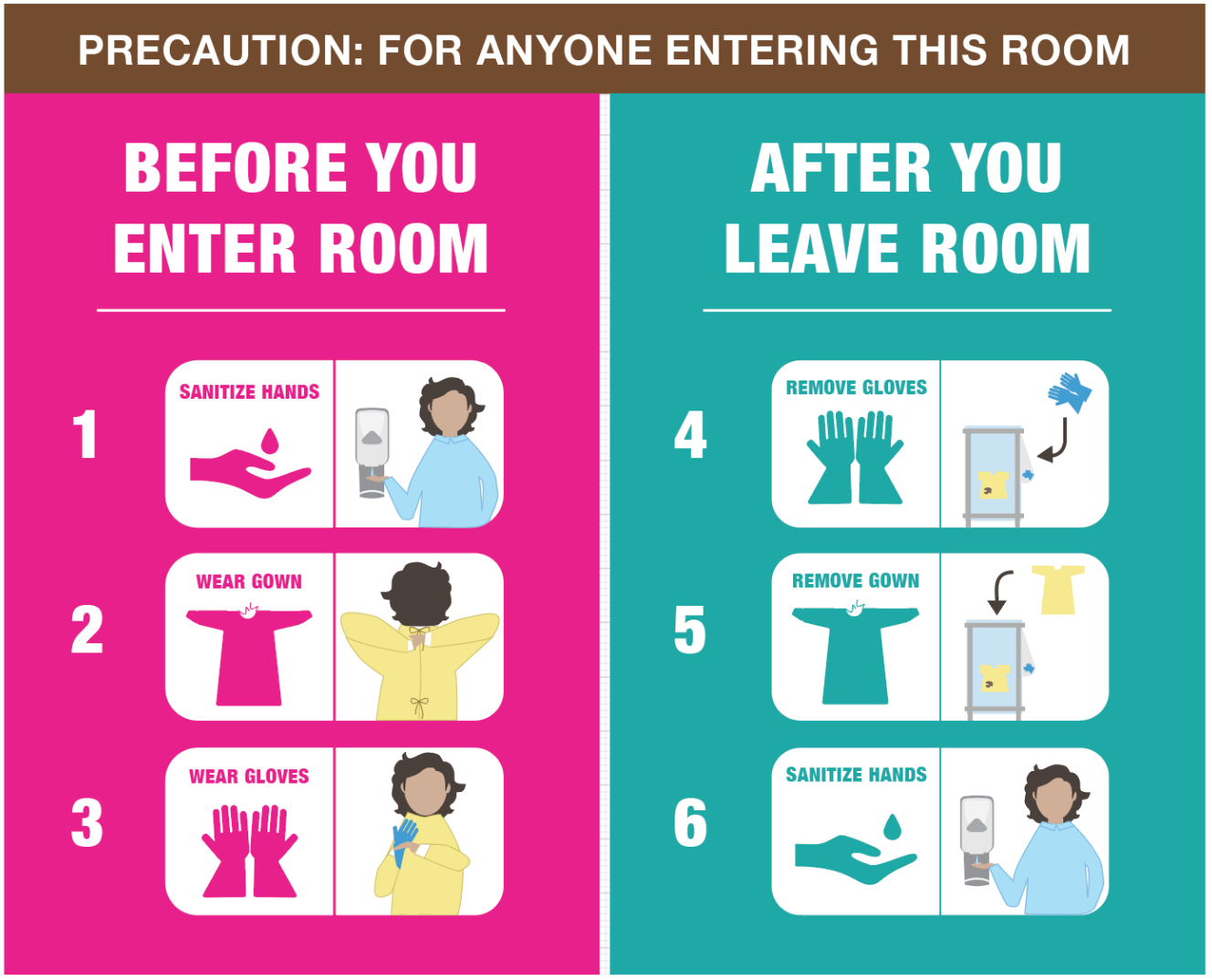 The Iteration 3 signage was also presented to IPAC, the Patient Education team, Administrative Executives, and Nurse Managers, and based on their feedback as well as the users' feedback, we made the following design changes.

The stop sign remained the same in this iteration. 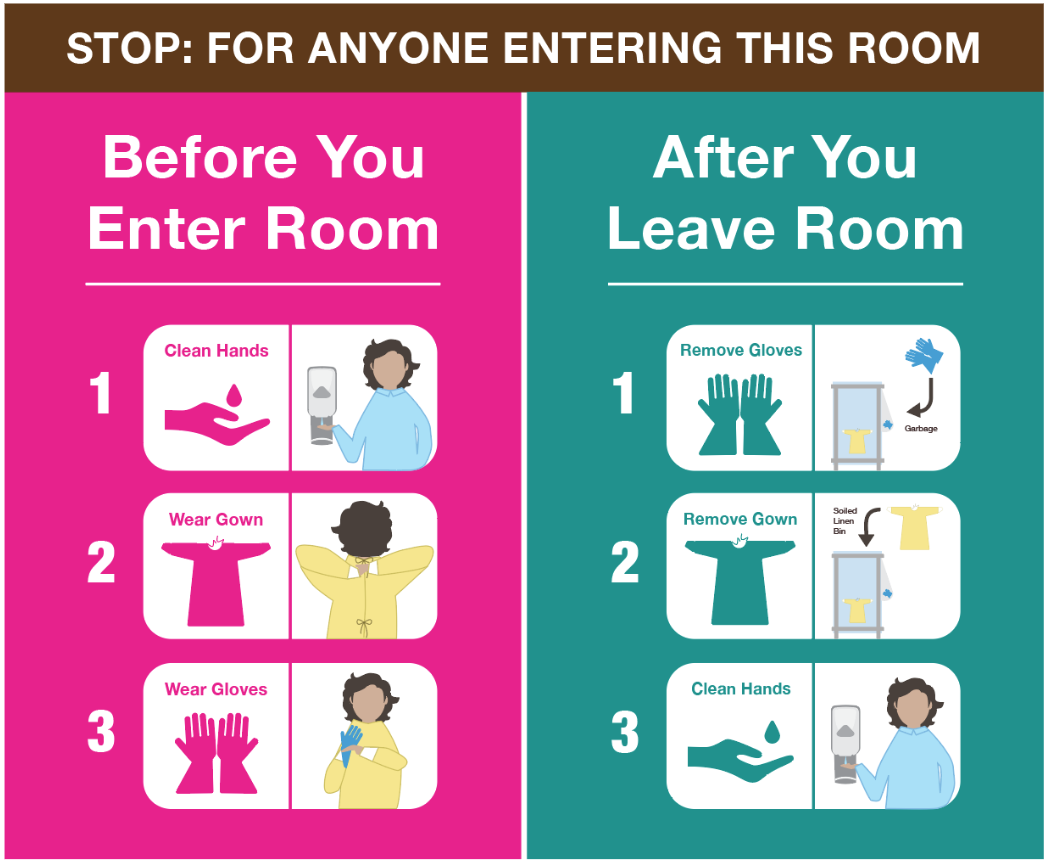 In addition to running usability tests at TWH, we had participants fill out exit surveys for each of the three user test sessions. These surveys incorporated System Usability Scale questions that enabled us to collect quantitative data about the usability of the system. The following chart shows that the usability significantly improved over the course of the iterations, with the final test (Pilot 3) representing the scores obtained based on Iteration 3 of the system, the final version in which we tested real users.

After the last design iteration, it was finally time to trial the posters at TWH in place of the PPE signage that is currently being used. That meant designing the Airborne Precaution, Droplet Precaution, and Contact MRSA Precaution signage in addition to the Contact Precaution signage. Carman and Yordanos had already designed the majority of these assets in the original style as well, but after making all the relevant updates, Athina and I realized we had one major issue.

The green colour that was linked to Droplet Precautions was too similar to the teal background we’d used for the exit posters, making the contrast between the top banner and the exit poster too low, as seen below. 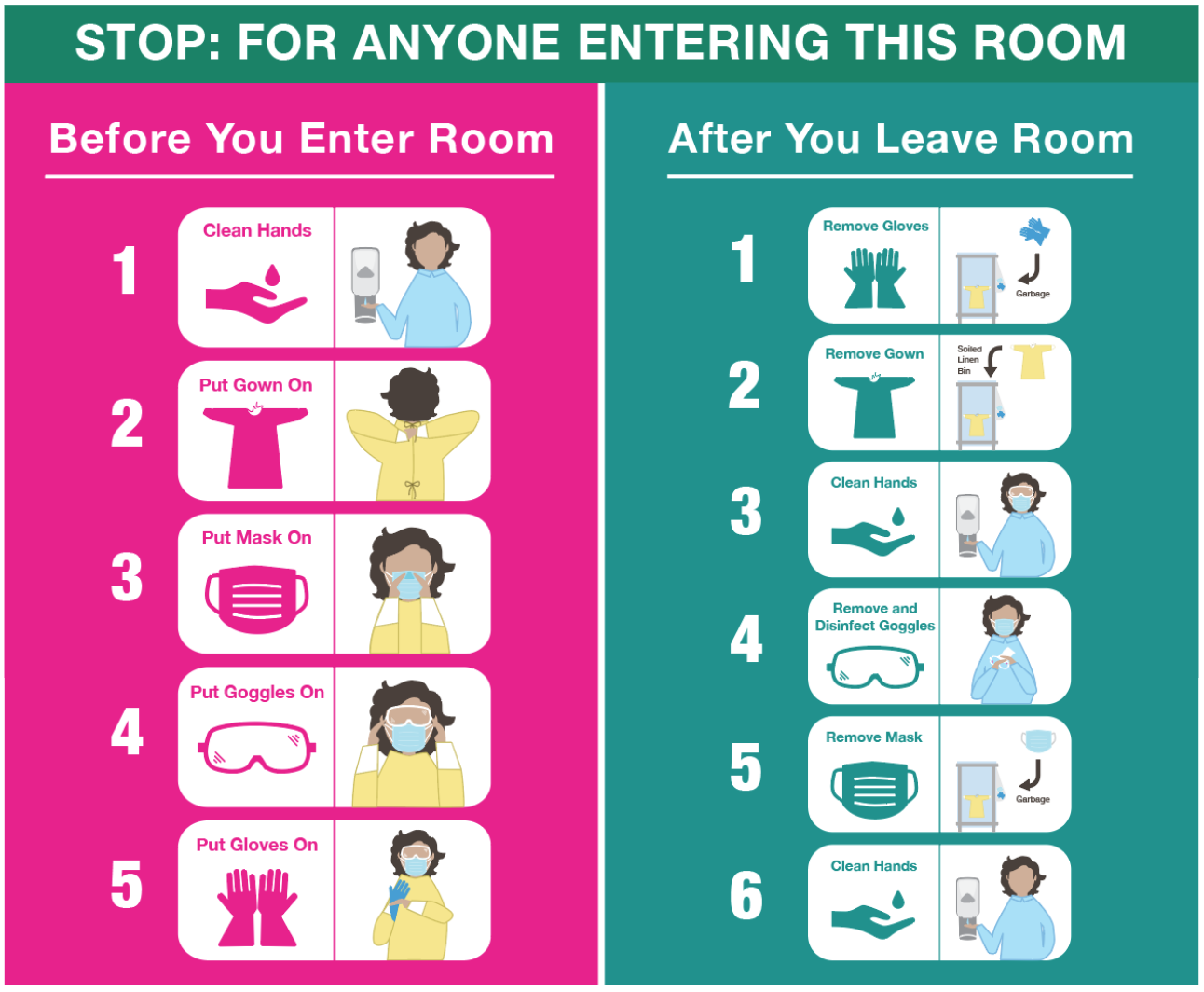 The solution? We simply added a black break banner in between the top banner and the rest of the sign. This way, the healthcare workers would still be able to refer to the colour of the top banner as an indication of what type of precaution the poster was for, which would assist them in selecting the correct assets when setting up an isolation room. The final versions of all of the assets are as follows. 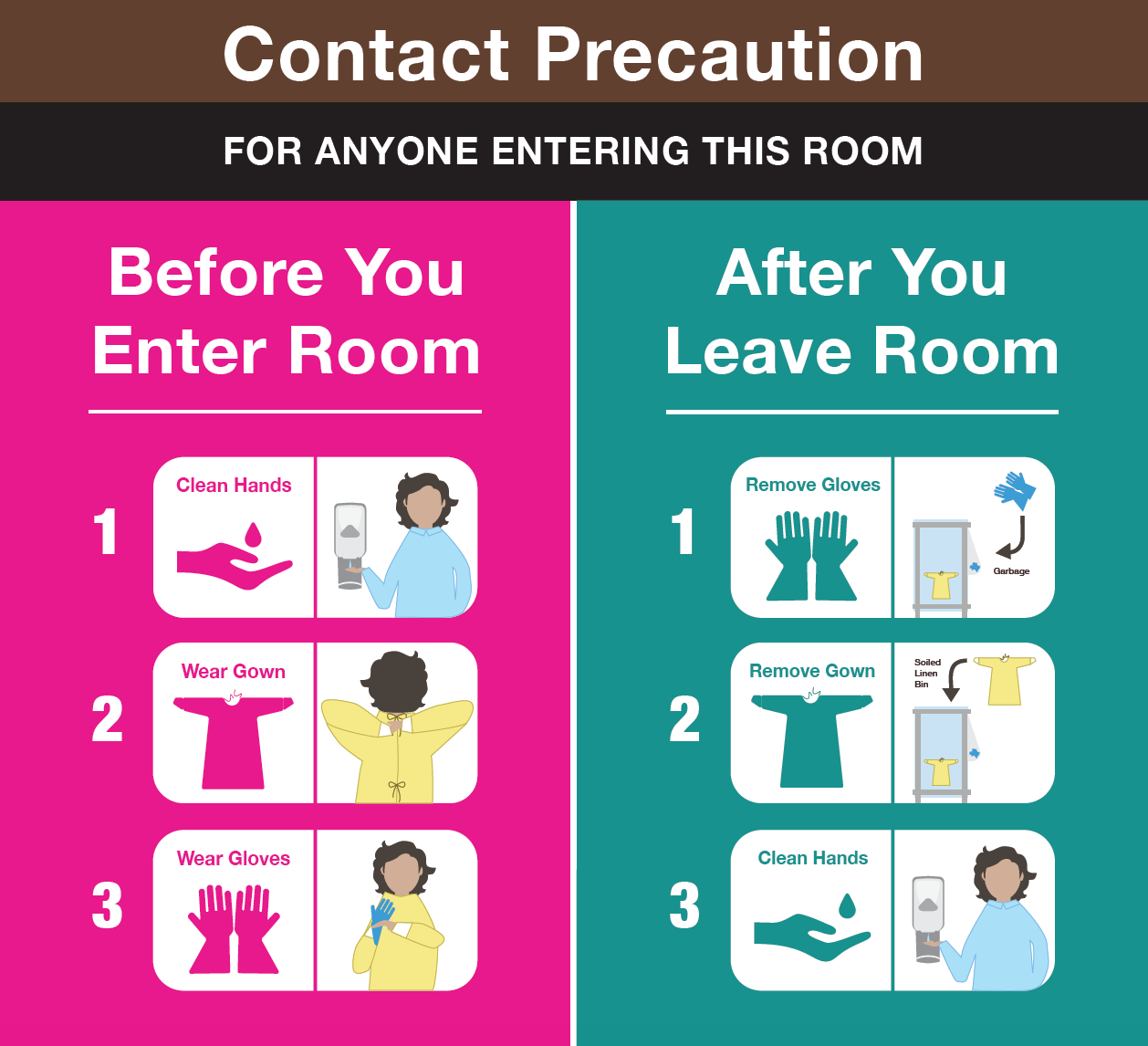 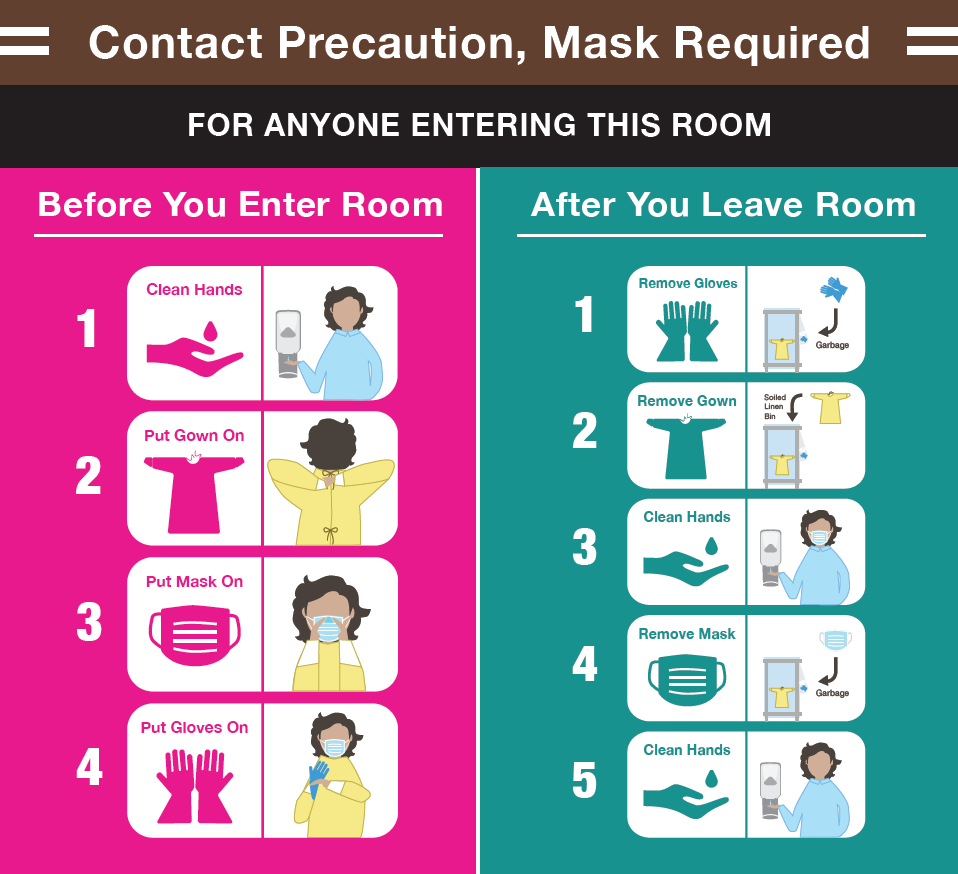 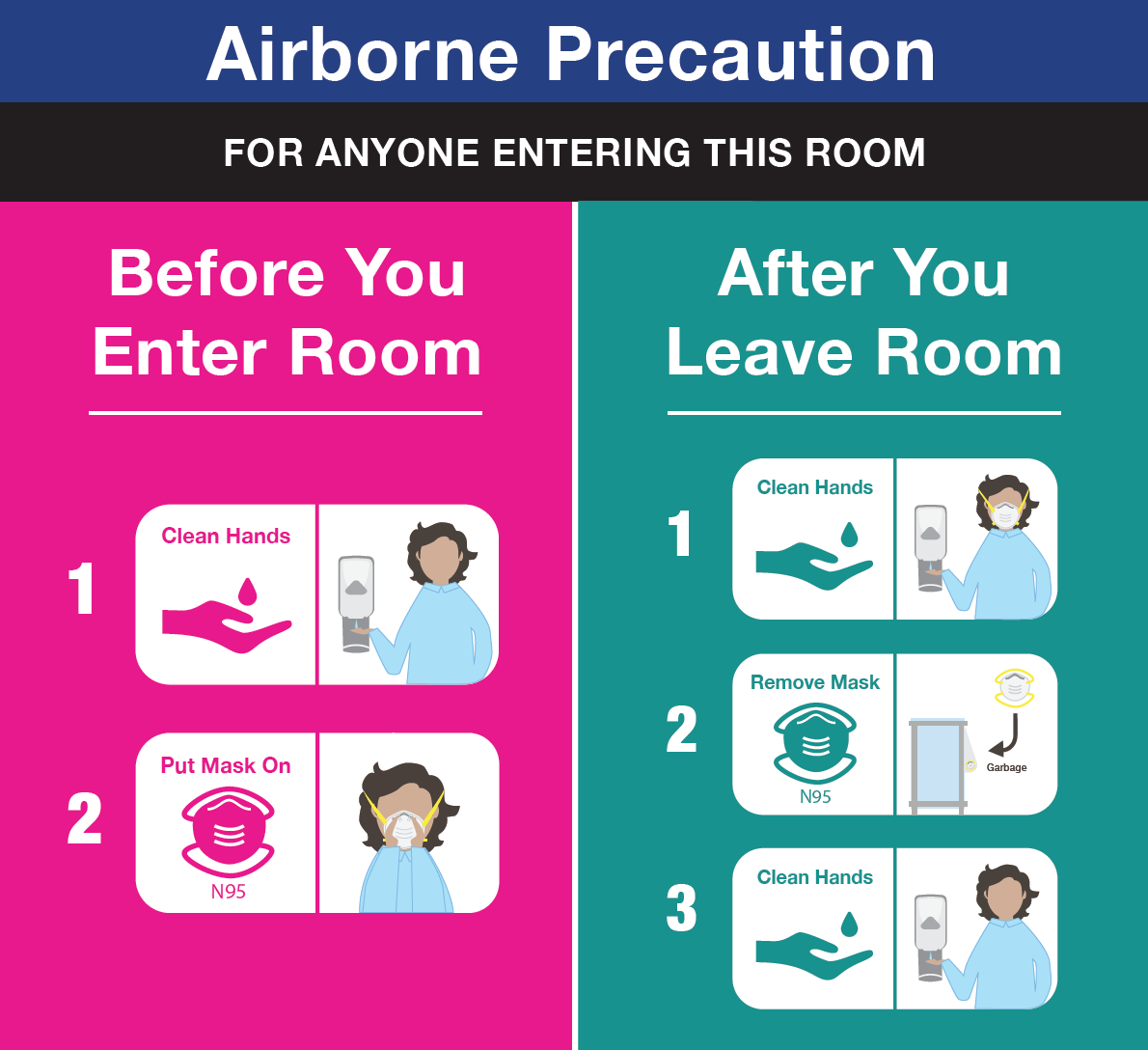 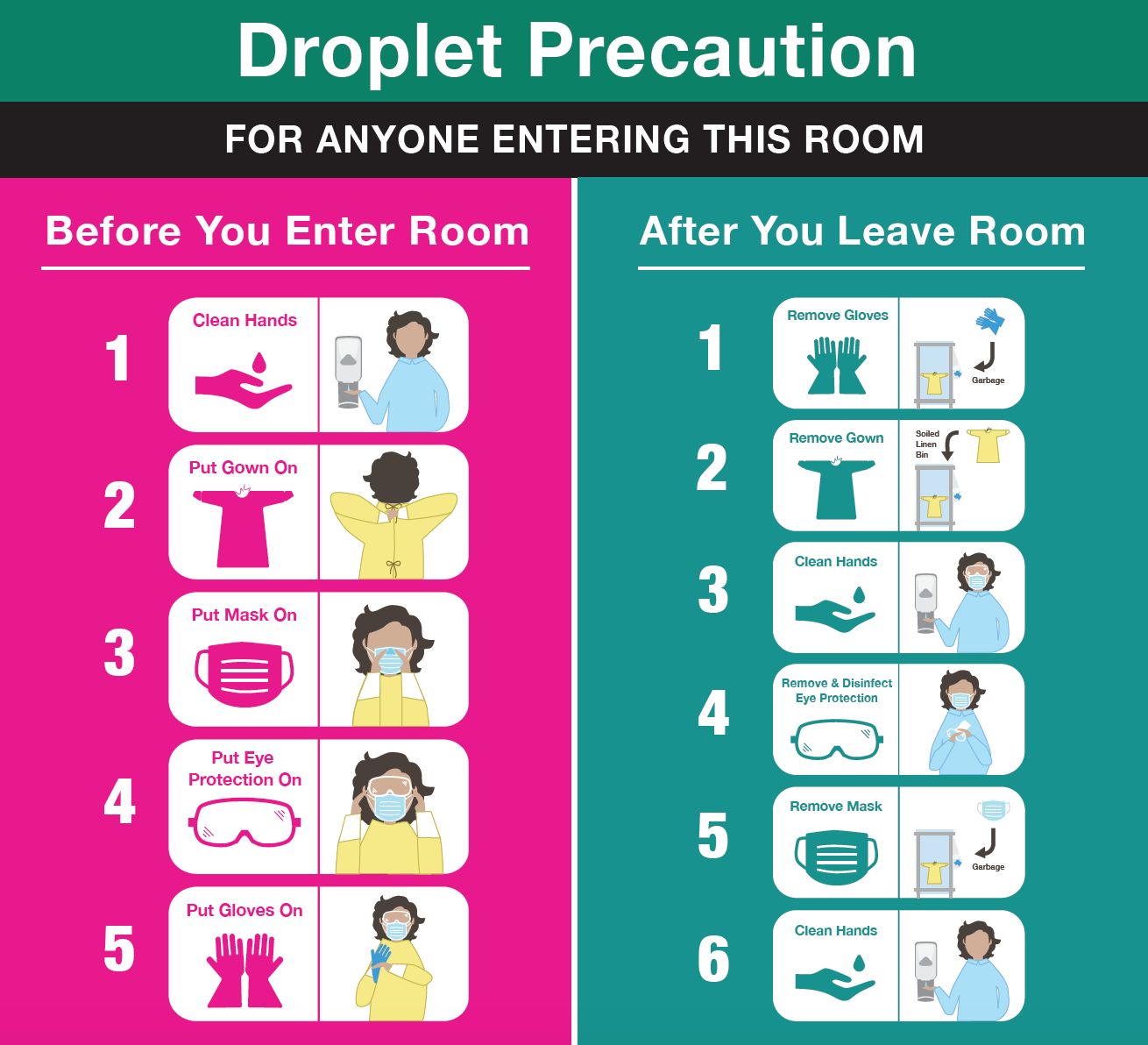 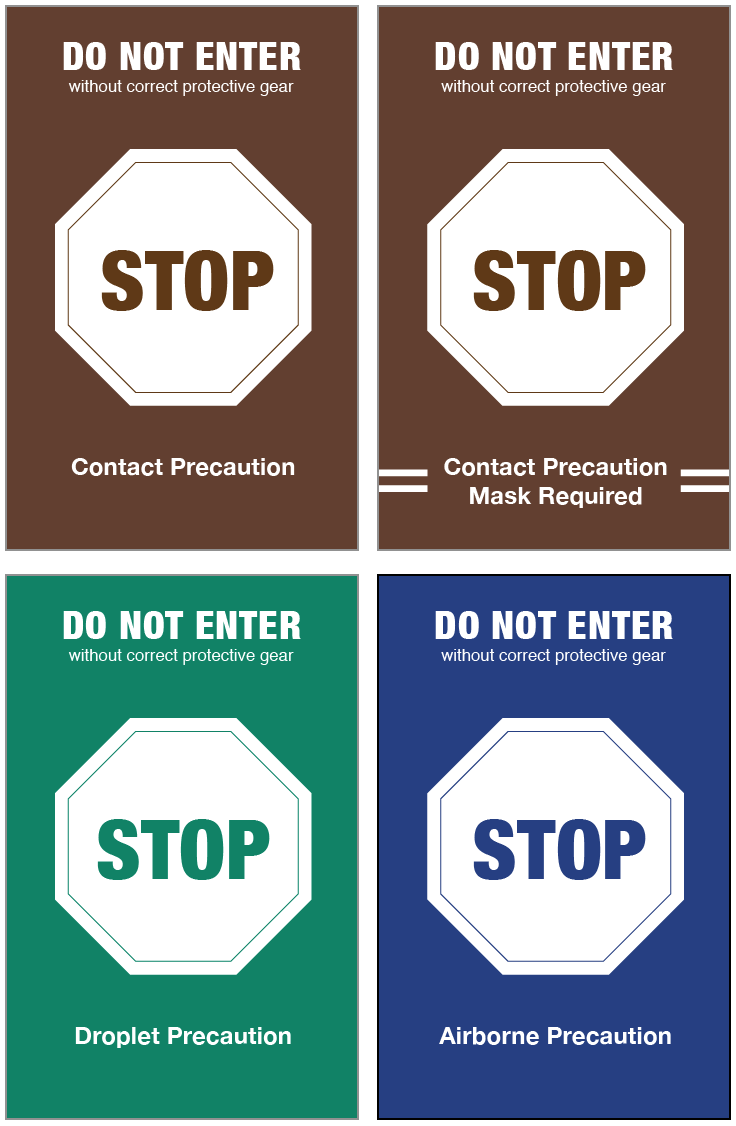 Ultimately, this experience was truly an eye-opening one for me as it enabled me to appreciate the time and consideration that goes into designing new systems in a complex institution like a hospital. I also developed a stronger sense of empathy after working with people ranging from HCWs to patient family members to medical students, as I was able to witness the ins and outs of the healthcare system through multiple different perspectives, and understand the needs of different user groups. Finally, I was lucky to work and learn alongside Athina, who worked patiently with me to develop my design skills, and gave me the freedom to explore and even take leadership of such an interesting project!